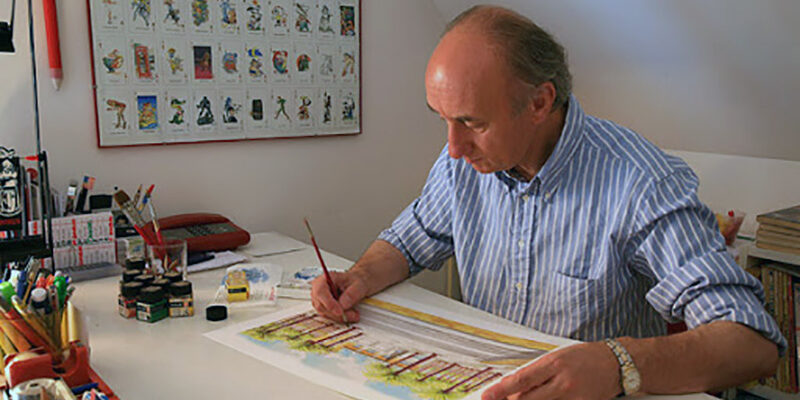 Appreciated Italian cartoonist, he was born in Rieti on June 18, 1946.

After graduating from the Art Institute, he moved to Milan and in 1971 began working as an illustrator for the L’esperto publishing house.

His debut as a cartoonist took the following year, when he designed pocket books for adults published by Renzo Barbieri’s Edifumetto.

He then went on from 1978 to 1979 drawing the Redskate series published by the “Corrier Boy”.

In 1980, the comic story of the Mister No series written by Alfredo Castelli and drawn by Angelo Maria Ricci himself, made him enter the “Sergio Bonelli Editore” which will publish it the following year.

A subsequent debut of Castelli in 1982 with the new Martin Mystère series, allowed Ricci to enter the operating staff as a designer of that and of many other stories until 1993.

In 1990, he also resumed his collaboration with the publisher Renzo Barbieri by designing the Sphero series and, at the same time, inking some episodes of Vallardi’s Tiramolla series.

Angelo Maria Ricci left “Sergio Bonelli Editore” in 1993 and moved to Corriere dei Piccoli to design the series The young Indiana Jones, collaborating at the same time also as an illustrator for Fabbri Editore and De Agostini.

In 2000 he decided to change his life by retiring from the cartoonist business and moving to Grottammare, in the Marche region, where he continued his activity as an illustrator for a local publishing house for school books and where the municipality also dedicated an exhibition to him.

In 2001 he resumed his activity as a cartoonist, permanently joining the staff of designers of the Diabolik series of Astorina, creating pencil drawings of numerous stories.

Prestigious character of the city of Rieti and important contemporary artistic heritage that has always been present with his incomparable works, thanks also to the inks that since 2007 have been made by his son Marco Ricci who carries on and enriches a beautiful family collection.