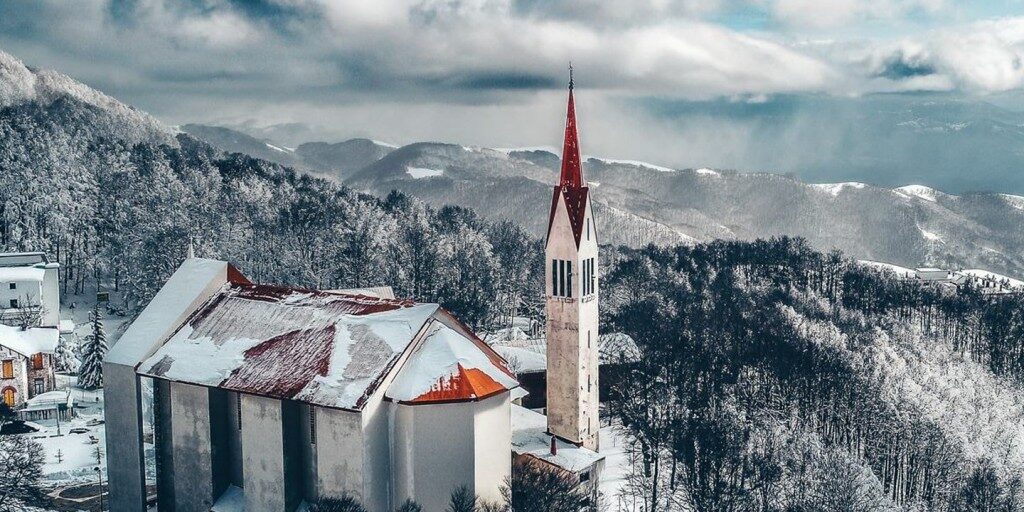 Everyone knows St. Francis predilection for inaccessible and solitary places, locations  wrapped in silence where it is easier to rediscover ourselves and listen to the Absolute. It is not entirely improbable that Saint Francis, in his long staying in the Rieti valley, let himself be attracted by the Terminillo massif. The call of the forests and of the mountains probably inspired him to climb these slopes in search of the One who only speaks to the heart.

On June 18, 1939, Pius XII declared Saint Francis from Assisi the patron saint of Italy. In memory of this event the Friars Minor Conventual wanted to build a Temple (located at 1623 m a.s.l.) on Terminillo.

This impressive but harmonious construction was undertaken by Fr. Riziero Lanfaloni, sent to this mountain on June 4, 1948. Constant work, painful tenacity, diligent impertinence, insistent request, small financial aids and donations resulted in this great religious building. On September 18 1949, after the solemn laying of the corner stone, coming from the Sacred Convent of Assisi and blessed by the Archbishop of L’Aquila, Card. Carlo Confalonieri, the ground works then started (1952). More than 25,000 cubic meters of rock were dug out thanks to the workers coming from the foothills, going up and down the mountain only for a soup and 500 lire. In 1955, thanks to a project by Arch. Fidenzoni of Spoleto, the construction of the Church began and on Christmas 1956 the first religious function was celebrated in a still simple and bare Church. The Church was consecrated by the Archbishop of L’Aquila Monsignor Costantino Stella on August 22, 1964, and then solemnly inaugurated by Cardinal Carlo Confalonieri on September 13 of the same year.
But the temple was not yet complete. So, in 1975, the work of art that today gives tone to the whole Church was brought to light: the apse mosaic, one of the largest single subject mosaics of the modern world.

In 1981-1982 the construction of the Church underwent other stages, by realizing an extension to the façade as protection for the adverse weather conditions of the mountain. A work, that of the National Votive Temple, which employed decades of anxieties and worries, of tensions and hopes, of ambitions and revenge, and that today, from its 1623 m. of altitude, it’s almost the representation of an ideal synthesis of the values ​​expressed by the four Franciscan sanctuaries of the Holy Valley, wrapped up in an evocative embrace.

The visit of the sanctuary starts from the square, where it’s possible to admire the pink and white and pink Assisi stone façade, which fits well into the naturalistic landscape, almost a continuation of the rock of the Sassetelli peak. At the center of the façade stands the outline of the prothyrum that recalls the façade of the Porziuncola. There are two figurative elements of great interest: on the top, a more than 3 m high solemn monolithic stone sculpture depicting Saint Francis by the sculptor Beniamino Falda (based on a sketch by Pietro Vitali); on the bezel of the portal, a bronze Annunciation by the sculptor Giovanna Fiorenzi. The outside of the complex seems to highlight that lyrical sense of invitation to enter and gather in prayer. Next to the church stands the 52 m high bell tower. On the main bell there is this inscription: “E caelis abreptum Pacis Bonique omen profundo festive,” which suggests that wind and clouds bring the Franciscan wish of PEACE AND ALL GOOD everywhere.

The interior, intentionally different from the outside, presents a unique architectural motif. The long and parabolic barrel vault recalls the Porziuncola one. Starting the tour from the right, the chapel dedicated to St. Anthony is visible, with a wall mosaic, in the center of which the figure of the Saint stands out with a refined perspective. The other depiction highlights the charity of the Saint: corporal and spiritual works of mercy. The Chapel was offered by the Commander Antonio Alecce.

Continuing on our tour, we come across the Chapel of the Crucifix, a wooden sculptural work of art from Ortisei. The chapel of the Madonna of Loreto, patron saint of the Italian Air Force, offered by the Airmen themselves, celebrates the glory of Mary Queen with the Child, surrounded by a crowd of angels. At his feet two of them carry the house of Nazareth.

Going up the Presbytery, on the right there is the Chapel of St. Francis. In the urn there is a relic of the Saint, a deep connection with his tomb in Assisi. In front of the urn is a perpetually burning votive lamp offered by pilgrims who come to the sanctuary. The glazed copper Crucifix of Romanesque school by Prof. Abbozzo recalls that of S. Damian. Of the same author, in majolica, the most significant scenes of the life of the Saint. From the right: – Francis listens to the Crucifix of S. Damian; – at Rivotorto the friars see the Saint in a fiery chariot; – Francis delivers the rule in Greccio; – prelates and friars in the first Franciscan chapter; – Francis realizes the crib in Greccio; – on the Verna receives the stigmata; – the dying Saint blesses his city.

The current arrangement of the Presbytery is by Pietro Vitali who, with a highly cultured sense of sacred ornaments, succeeds in summing up the eminently modern linguistic module and primitive criteria in a harmonious compositional synthesis. The Great Cosmic Cross is one of the oldest sun symbols, and it is a sign of divinity. The table, consisting in a single block of stone, is adorned with an antependium with bronze plaques depicting episodes from the life of St. Francis. From the left: Francis supports the Lateran; Francis preaching to the birds; Francis renounces to his clothes in front of his father; Francis receives the stigmata; Italy and its patron; the cathedral and the Basilica of Assisi; from baptism to glory.
The Tabernacle of 1400, harmoniously set in the modern complex, has tempera-painted valves depicting the deposition in the center and two angels on the sides. The pulpit by Aldo Laurenti, is in majolica and represents the four Evangelists and their symbols. On the left wall is placed the organ (1969) by the company of the Pinchi Brothers from Foligno. Continuing the tour, we find the Chapel of Saint Barbara, Patroness of the City of Rieti. At the center of a celestial light the Saint is depicted with the three-windowed tower, attribute of Saint Barbara, symbol of her Trinitarian faith; underneath a series of characters protected by her: Sailors, Carpenters, Engineers, Artillerymen, Builders of Bridges. The Chapel of Santa Rita preserves a hand-crafted statue of the saint, from Ortisei. The last large chapel with a wall mosaic houses the baptismal font. From the dove at the top radiate light rays that recall the beams of light by Bernini. The baptismal font consists of a monolithic block of green Genoese marble, with glaze copper biblical scenes that recall the sacrament of Baptism. The wall mosaics of the four side chapels are from the Vatican Mosaic School. Note the fascinating and engaging VIA CRUCIS along the entire perimeter of the church, consisting of 14 high reliefs by the sculptor Aldo Laurenti. Made of stoneware, these clearly show the different sensations, emotions and passions of the characters that underline the drama of the fundamental historical event of the Christian faith.
The stained-glass windows represents the theme of the Canticle of the Creatures, and strongly highlight the natural forces of the sun, water, wind and even the sweet and fascinating stellar and terrestrial reflections. Having reached the bottom of the church, one can now quietly enjoy the spectacle that the church offers: the impressive 350 square meters apsidal mosaic representing the mystery of creation, represented as an expanding nebula whose propulsive center is God’s love. An admirable combination between faith and science, and from that love that gives life to all things, one feels attracted, almost wrapped in a sweet, tender embrace.