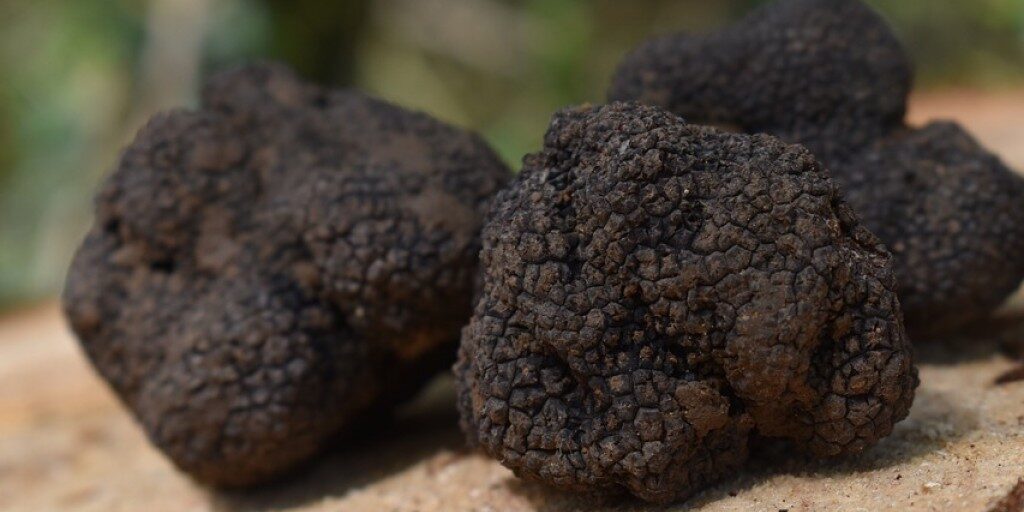 ORIGIN
The truffle is an underground fungus renowned for its flavor and aroma. In particular, the Romans who considered the Rieti territory a fertile plain worthy of hosting noble figures during the holiday periods or in old age, strongly appreciated the richness of this hidden potato-shaped mushroom.

HISTORY
A truffle is the fruiting body of a subterranean ascomycete fungus. Since ancient times it has been the subject of research for its ability to enhance different types of dishes. In particular, two species of truffle are the most precious, the Tuber magnatum Pico (white truffle) and the Tuber melanosporum Vittad. (superior black truffle), the latter particularly widespread in the Rieti area.
The tuber genus lives in symbiosis with different tree species: oaks, hornbeams, limes, willows, hazels, etc. valorizing neighboring forests and not to the city.

PRODUCTION AREAS
Considering that productive truffle grounds are not frequent but can also be found in some green areas of the city, it is necessary to indicate the district of Cicolano as one of the richest in the genus. This precious fruti of the earth can be found also in Terminillo’s beech forests, along the Velino Valley and in the areas of Mount Tancia. Truffles have a very long harvest period, as the melanosporum covers the winter period and the aestivum, as the name says, the summer one.

ORGANOLEPTIC CHARACTERISTICS
Truffles do not have a great nutritional value; the water content is very high, around 80%. It contains many mineral salts but few proteins and carbohydrates. However, the substances that characterize it have strong aromatic properties, able to stimulate both smell and taste. We can therefore say that the truffle is essentially paid for the degree of pleasure that it gives to the diner, enriching numerous dishes with its great flavor and smell.

PRODUCTIVE PROCESS
The truffle harvest is regulated by regional law and can be exercised only if you have a specific license.
The summer harvest for T. aestivum and winter one for T. melanosporum must be carried out with the help of a specially trained dog and following a strict methodology; this in order not to compromise the productivity of the sites where the fungus is hosted.

USES
The truffle is one of the “lords” of the local gastronomy. In the municipality and in the province of Rieti there are numerous restaurants offering truffle-based dishes. There are many farms that, in a multifunctional perspective, undertake agro-tourism and rural tourism support activities, allowing tourists to enjoy the aroma of this mushroom and using it mainly as the key ingredient of the typical dishes of the area.
o nei piatti tipici della zona.