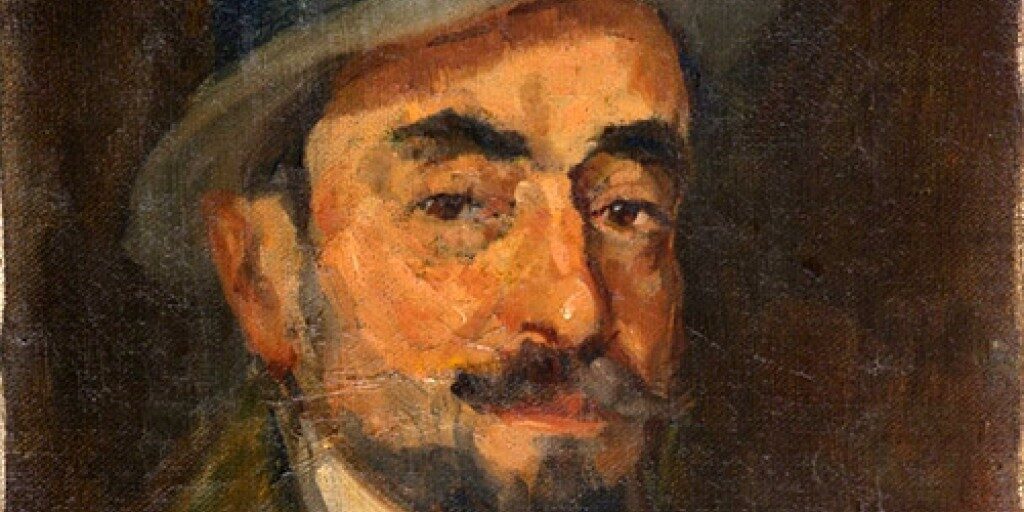 Born in Rieti in 1876, in the panorama of the Roman artistic culture between the, in the, the personality of the

Antonino Calcagnadoro was born in Rieti in 1876, surrounded by the Roman artistic culture that describes the period between nineteenth and twentieth centuries, characterized by both the perpetuation of the tradition and the renewal of the decorative Art Nouveau.

It was his father Cesare, sensitive to art, to introduce Antonino to the profession of painter. In 1887, having completed the first grade of school, the young man perfected himself in the pictorial disciplines relying on the support of the canonical uncle who also supported him economically. Between 1890 and 1891, he began his career as an assistant in the decoration of the dome of the Flavio Vespasiano theater in Rieti, alongside maestro Giacomo Casa. The work was destroyed after the earthquake of 1898.

The collaboration with his master continues and he deepens his education in Rome, privately, until he reaches his diploma at the Royal Institute of Fine Arts, in 1898. In these precious Roman years knows and frequents different artists. In the period 1900-1904 he received his first important assignment: the decoration of the parish house of San Rufo in Rieti and, later, that of the chapel of the Crucifix in the cathedral. Interventions also follow in the clear art nouveau style of Terni.

In 1905, the prestigious Rieti commissions began: the tempera decoration of Palazzo Sanizi, followed, in 1909, by the famous construction of the Allegories in the Council Hall of the Municipality of Rieti, depicting the Arts, Crafts, Justice and Agriculture. The cycle, that sometimes recalls a Tiepolo-like style, enhances the essence of the Rieti culture for its genuinely rural tradition. The decoration, enriched by clear liberty style furnishings, shows assonances with the Viennese Secession, such as the unrestrained and watercolored technique that interprets the idyllic dimension of country life. At that time, the artist strengthens the professional relationship with the architect-engineer Cesare Bazzani, designer of the new town hall and of subsequent important Roman projects that would help him to reach his artistic maturity.

Between 1910 and 1913 he received another public assignment: a huge painting, placed behind the curtain of the city theater, representing The surrender of Jerusalem to Vespasian.

Of these years, worth of note is the pictorial decoration of the Mattia Battistini’s villa in Collebaccaro (Contigliano) the famous Italian tenor born in Rieti. Significant for his artistic career is the ambitious competition for the decoration of the Vittoriano in Rome. The subjects requested were: the Vision, the Awakening, the Renaissance, the Preparation, the Holocaust, the Risorgimento, the New Italy. Calcagnadoro created the eight sketches that should have been translated in a mosaic; the painter did not win the competition, but received an honorable mention.

In 1916 he realized the decoration of the foyer of the Rieti theater, representing Drama, Tragedy, Comedy, Dance and Opera Muses. During war times he dedicated himself to the illustration of art magazines. In 1918 he moved to Rome and started working as a teacher at the preparatory school for ornamental arts and at the free school of nude. Mario Mafai, from the Roman School, is one of his students.

Thanks to Bazzani, Calcagnadoro also had absolutely prestigious assignments in Rome, such as the decoration of the reception hall of the Ministry of Education, in 1928. Pictorial cycle that clearly alludes to the great figures of Italian civilization, his work illustrates the unifying value of knowledge, the building of the nation through the power of education. This decoration was followed by the equally significant painting in the hall of honour of the Ministry of the Navy and the decoration for the entrance of the Hospital of Santo Spirito.

The whole life of Calcagnadoro is accompanied by a copious and never interrupted production of oil and watercolor easel painting. He always measured himself with contemporary trends while remaining faithful to the figurative tradition of liberty matrix and the post-impressionist experimentation with landscapes and techniques. This can be seen in his views of the ancient city, in the themes related to the tradition of realism, in the views of the local landscape. During 1923 and 1924, the experience in North Africa, Tripoli, pushes him to represent desert landscapes and local life, rediscovering a clearer and more sunny palette.

He died in 1935, shortly after having received notes of appreciation from the Savoy Family, culminated in the title of Grand Officer of the Crown of Italy. In 1937 the painter’s heirs gift the city of Rieti with a large collection of works now visible in the “Calcagnadoro room” of the Civic Museum of Rieti.